My one political post and manifesto: It has to stop. 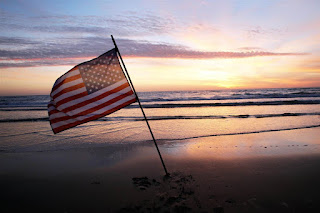 The response to this presidential election has been... sad.  On all sides.  Democrats are speaking out, calling those who voted for Trump racists, bigots, supporters of sexual assault and sexual harassment.  Republicans are celebrating and saying that this is going to "make American great again," implying that it wasn't already.  Those who opposed Trump are rioting and protesting, burning American flags.  Democrats are blaming those who didn't vote and those who voted for 3rd parties for this outcome.  Republicans are speaking with pride and not being mindful of what they say or how they say it.  They are not realizing how tender and deep the wounds are for some people right now. And if I hear one more person call someone whose beliefs are simply different from their's "uneducated," I feel like I am going to lose it and educate that person myself on what it means to be "educated."

The saddest part of all of this to me is that it shows how twisted our culture has become, how twisted our world is, and how saviors are now found in people instead of the divine.  It reflects a world that seeks hope in men and not in Christ.  It reflects a generation who seeks hope in other people or things, and a generation who claims to be open-minded but isn't.  I'm tired of the hypocrisy.  We are a democracy, are we not?  Those who on Tuesday were posting photos of their "I voted!" stickers and encouraging people to "just get out there to vote!" are now the ones criticizing people for doing that very thing, but for voting for a candidate that wasn't the one they would have chosen.  I believe in voting for who you believe will do the best job in office, whose goals most align with your own and whose vision for where the country is going is most similar to what you believe in.

Are you shocked that in a bipartisan system, there isn't always a candidate who aligns well with your beliefs? I'm not.  I've been a critic of the bipartisan system for a long time.  My beliefs do not fall into one political party.  And yes, I do believe Americans have the right to vote for the third party candidate if they wish to.  I absolutely do not believe in shaming people for this.  I dream of the day when our country moves away from the bipartisan system, a system that only leaves room for division and hatred.

I do not believe in shaming people who think differently from you.  My generation shocks me.  I am truly embarrassed by my generation right now.  And not because of who they voted for or what they believe in.  I'm embarrassed for their behavior and their hypocrisy.  They claim to believe in diversity, but they do not promote diversity of opinions that are not in line with their own.  And the worst part is that pointing this out to them only adds fuel to the fire, or makes them think, "Oh, you have no idea what you're talking about."  How self-righteous and condescending, and how sad it is that you live in that mindset.

To all the women (AND men) who have tried to shame other women for not voting for Hilary, this is just not ok.  You talk about sexism and how abominable that is, yet you are telling someone to vote for someone because she is a woman? Oh my.  I can't even go down that road right now.  My brain can't handle unraveling that thought process.  Think long and hard about what you're asking of other women.  That's a tall order and not one that I think you have the right to request of other women.  I think our country is ready for a female president, but I don't believe in shaming people for not believing in the one who was running this election year.

No matter who you voted for or didn't vote for, no matter what you believe or don't believe, you have no right to shame people for who they voted for and what they believe in.  I want the self-righteousness to stop.  I want the shaming to stop.  I want the ugly words to stop. I want Americans to grow up.  Stop saying you're moving to Canada--you're not.  I have lived through 3 elections while I was simultaneously involved with Facebook and have seen these extravagant claims each time.  I haven't met a single person yet who actually followed through.  If you really want to leave, stop spending your time posting about it online and start researching what it actually takes to get a visa or become a citizen of another country.  It's not as easy as packing your bags and driving over the border. Also-- if you are saying that you are praying for our country and our leaders, I hope you earnestly, honestly are and that you aren't just saying that in a spiteful way to indicate that you think our country needs help.  It clearly does, and if you are reporting that you are "praying for our country," I honestly hope that you are sitting at the foot of the cross asking for God to shower endless mercy and grace on our country in the coming weeks, months, and years, and that He would give vision to our leaders for what is good and right and peace-seeking.

Have an open mind.  Trust that God's hand is present.  Trust that people will surround our new President who will not let our country turn into one of hatred and violence.  And look in the mirror and see how your words and actions are leading us in that direction.  And realize that this "my side vs. your side" rhetoric won't help things in our country.  Viewing the other side as the enemy creates further division amongst our people.  Stop blaming people.  Stop shaming them. And for Republicans who feel victorious, stop speaking with so much pride and joy when there are clearly people around you hurting.  Quietly celebrate and take note of the feelings around you.  This was a tough election year and many feel that they were just choosing the lesser of two evils-- be mindful in how you speak and what you say.

"And I sent messengers to them, saying, 'I am doing a great work and I cannot come down.  Why should the work stop while I leave it and come down to you?'" Nehemiah 6:3

I can't unpack this whole verse for you with how I see it relating to our country's circumstances, but I just find hope in it.  And more than ever, I find hope in the new creation that is coming.

"And he who was seated on the throne said, 'Behold, I am making all things new.' Also he said, 'Write this down, for these words are trustworthy and true.'" Revelation 21:5.

Also: I hope I have not shared any insight into my own political opinions in this post, but rather, just personal opinions about behavior related to politics. If I have offended you, I deeply apologize and hope you can see that I never meant to be hurtful.  I want the meanness, the shaming, the ugliness, to stop.
Posted by Cristina at 10:22 AM

Cristina
A Yankee turned Southern Belle (and more recently, a Midwestern girl!) on a quest to experience bold love, redeeming grace, and endless peace. I have been blessed by the Lord and strive to serve Him with my life. I have a loving husband, sweet family, and incredible friends.

Promote Your Page Too