At Your Own Pace 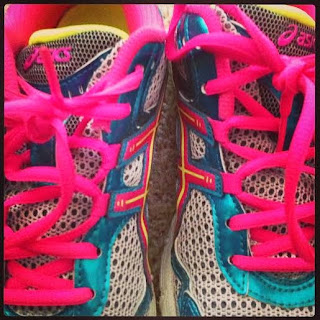 There are a lot of things in life that sound really fun until I try them.  Watching the Olympics lately really has me believing that there's a lot of athletic activities that I would enjoy, but trying them is another story.  Six years ago when I was starting nursing school, I craved movement.  I was spending all of my days pouring over textbooks about the body and health and how to care for my body well, and I was doing all of this with my legs folded under me in a library or my dorm room.

I chose running as my form of movement, even though I hated it so very much.  I had been running with friends before and could barely make it a mile.  "Isn't this a nice way to exercise? Isn't this fun?" they would ask.  I couldn't understand what they were talking about, and wherever that little pleasure headquarters was located in my brain (somewhere in the pons of the brain?), I was aware that nothing registered there at all.  There was no amount of contentment or pleasure in this activity.  But for some reason, I felt drawn to it, like I knew it would be good for me and I knew I could make myself like it.  Have you ever made yourself do something until you've liked it? I've done this with so many foods in my life-- eggs, blueberries, seafood, etc.  The one food I can't get past is bananas.  They just weren't meant for me (unless they're in a tasty banana chocolate chip bread, in which case, sign me up!).  So I figured I could definitely do this with running, force it upon my heart until I loved it.

And it worked.  I laced up my gym shoes (I can hardly call them running shoes since I never bought them with the intention of running), put on some Nike shorts and a white V-neck, the classic look of athletic girls in the south, and headed out the door.  I had heard of this little street called Gimghoul Lane behind my dorm where there was a supposed castle, and I thought this would be a good place to start running.  I walked a good bit before arriving, and when I was safely tucked behind the trees, away from the busy road where new students were arriving, I started at a light jog.  No need to sprint and wear myself out on my first time, right? I ran about half of a mile while listening to Hillsong United music.  I slowed down, and thought, that's good for today.  I walked back to my dorm room and felt strong, encouraged, ready to do it again the next day.

So I did.  Each day, I tucked myself away on Gimghoul Lane, under the shade of the oaks and the pines, and I taught myself to enjoy running, at my own pace.  A few times I would try to do runs with friends while I was still learning this practice, and I always hated it.  Not because I didn't enjoy their company, but because I didn't enjoy running at someone else's pace.  My happy pace as a runner was running a 12 minute mile, and I did that for a very long time.  When I moved up to Indiana and continued running, I shaved down to a 10.5 or 11 minute mile, but still didn't push myself to run 8 minute miles like my friends.  When I tried running at someone else's pace, I felt frantic, rushed, anxious, and like I had no control over my body or emotions.

Life is best lived at your own pace-- not on someone's else's terms or at the pace that works for them.  Some people thrive off of a really fast-paced life, needing constant stimuli to keep them engaged and sharp.  I can't live life at that pace.  It's not meant for me.  I'm from a beach town in southern North Carolina, and life there has taught me that my rhythm is slower, steadier.  I like taking in what's around me instead of running around frantically and missing the beauty surrounding me.  Life at a breaknecking (thanks Dr. Seuss for allowing this word to be used in this way) pace is for some people, but not for me.  And recognizing that has been freeing and has allowed me to enjoy so many things that I may have missed out on had I not turned the speed back just a few notches.

I remembered all of this when I was swimming yesterday.  I was in the pool at the gym in lane #3.  Lane #1 had what appeared to be a triathlete training for the swimming portion of his race.  He had one of those gigantic watches that he kept pushing buttons on to time himself, and he would sigh every so often in frustration or smile when he was hitting a pace he was happy with.  Lane #2 had a gentleman in a large scuba mask who appeared to just be getting familiar with swim strokes, and he was very slow, steady, and gave himself a lot of grace when he messed up on a stroke or had to reset himself.  Lane #4 was a man who was going at a medium pace using some type of weighted gloves for his swim, I'm guessing for some sort of strength purposes.  And then in lane #3, there was me.  Wedged in between all of the different paces, I was swimming breaststroke at a slow, steady pace.  Quick enough to make my heart race and make me feel strong with each stroke as I propelled forward, but also slow enough to notice all that was going on around me.

My encouragement for you is to make sure you're living your life at your own pace, instead of trying to kill yourself living at someone else's. Life is sweeter on your own terms, and much more difficult and trying if you're on someone else's.

Cristina
A Yankee turned Southern Belle (and more recently, a Midwestern girl!) on a quest to experience bold love, redeeming grace, and endless peace. I have been blessed by the Lord and strive to serve Him with my life. I have a loving husband, sweet family, and incredible friends.

Promote Your Page Too